Four nights into my visit to Thailand my dreams are a messy muddle. I’m in predominately Buddhist Thailand visiting temples and monks and I’m half way through the first season of Vikings where the Norse Gods Thor and Loki are making it hard for the Vikings to cross the seas to pillage another English Monastery.

The more I watch Vikings the more I dream about Tony Stark flying around in a sea of incense smoke, saving the day in colourful temples with quiet monks going about their day not noticing the Hulk banging around.

Perhaps I’ve stumbled upon the next crossover film, move over Spiderman, you’re no longer needed to save the planet from aliens with your fellow Avengers, Ragnar Lothbrok, the formidable Viking, is coming.

While in Chiang Mai I visited only four of the over 200 temples, including Wat Phra That Doi Suthep, one the holiest places in Thailand, perched half way up a mountain overlooking Chiang Mai. It has been surveying the landscape quietly as it has shifted and changed since 1383, quietly observing the change of forty-nine Kings and eight dynasties.

It’s placement on the mountain is not by chance. According to legend, a magic relic which was to be enshrined in another temple, multiplied itself. Requiring a new place to enshrine the clone, the King placed the relic on the back of white elephant. The elephant then walked up to the top of Doi Suthep Mountain, trumpeted three times, spun around three times, then died on the spot. Seen as a clear sign, the new temple was built on the site where the elephant fell.

To get to Wat Doi Suthep I caught a red Songthaew, which is a taxi on the back of a ute that can fit ten people in the back, on benches. Some have a bar along the middle to hold onto, some don’t, and on the trip up to Wat Doi Suthep you want one that does.

It winds and twists its way for 30 minutes up the mountain, driving on both sides of the road, swerving lazing dogs napping in the sun and flying along as the passengers in the back play the best game of corners you’ve ever experienced, except we’re all strangers, and it’s weird.

There were some people walking and riding bikes up the mountain, which looked hideous. It’s an up-hill ride for at least an hour and a half, and apart from the absolute burning calves, thighs and lungs in the 30 degree heat, with smoke blanketing the city, you run the high risk of being run over like a turtle in a hare race by a speeding songthaew. Each to their own, but just no, nope, no.

The temple itself is the grandest in Chiang Mai, and best seen early in the morning or at sunset. Once you have climbed the 309 stairs to the top you are greeted by the bold colour and shine of copper, bronze and gold.  Thai temples are so glaringly beautiful, certainly not shy or understated. They are a sea of shiny things, a bedazzled array of objects and places of worship. The Golden Mount in the middle of the temple glistens in the sunshine and is surrounded by multiple Buddha’s and shrines. 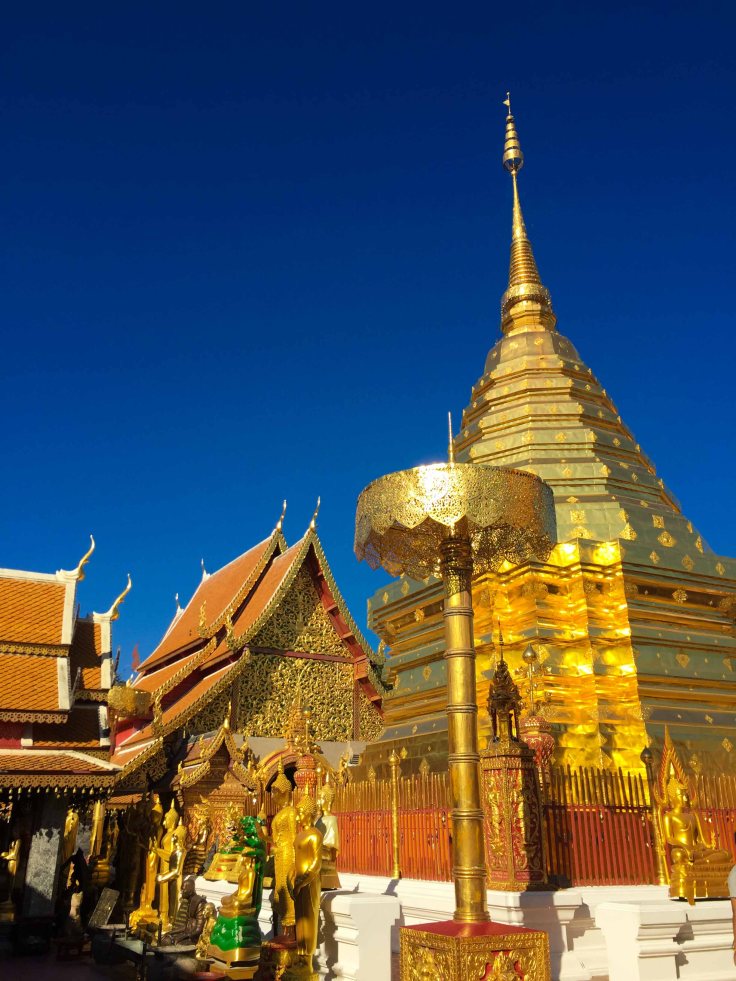 There’s something really special about being allowed into a holy place of worship. I always find it grounds me, makes my mind stop for a moment and appreciate where I am. I’ve experienced the same thing in different places around the world, sometimes in grand monuments such as the Vatican and other times in the smallest of temples or churches. A quietness. A stillness.

Well, it did in the first temple. As I walked into the second temple I spotted a wax figure monk sitting quietly in the corner. Wax figure monks are not out of the ordinary in Thailand I’ve discovered. After working at Madame Tussuads for a number of years I’m a bit of a wax snob, I’ll be honest, but these are quality wax figures. Though to be fair I don’t know what the original person now represented in wax looked like, unlike the detail in Brad Pitt’s eyebrow from months of research. It was a tough gig.

I sat down for a couple of minutes just taking in the space. Being the only breathing person in the temple all I could hear were the bells outside being rung by children who clearly didn’t speak either Thai or English enough to read the sign saying “Don’t Ring the Bells” in bright red writing.

As I quietly searched for a nugget of wisdom the monk spoke to me and I jumped about a foot in the air!

Could this be my religious awakening, being spoken to by a wax figure? Surely not.

Was he upset that I’d judged the quality of the sculpting of his arm muscles, the inserting of his eyebrow hair?

And from behind me I realised an actual monk, very much not a wax one, was speaking to me from the other corner. When he saw my face he smiled and held back a laugh as best he could, and spoke to me in Thai.

He may have been calling me a fool, blessing me for my stupidity or explaining that wax figures aren’t real. I’m not sure, but I smiled back politely and spent the next ten minutes thinking wisdom is so far from my grasp.

2 thoughts on “Thor and the White Elephant”